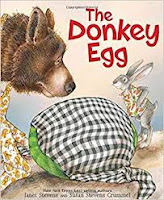 "Not YET - but it WILL be,"
said Fox. "It's a donkey egg!
A genuine, certified donkey
egg! Still green - has to ripen
and hatch. That's where you
come in. Keep it warm, safe,
and happy, like a little mama
bird in her nest. It will take
time - minutes, hours, days,
weeks, months - so be
patient. Then VOILA!"

Little kids are not likely to fall for Fox's scam about a donkey hatching from an egg (when it is perfectly obvious they are looking at a watermelon), but Bear falls for it!

We know Fox to be a wily character. So, when he drops by with a proposition for Bear, it isn't surprising that he convinces Bear to part with $20 in exchange for a 'donkey egg'. Bear is a tad cynical; Fox is very persuasive.

"As you know, Bear, lots of animals come from eggs -

Dinosaurs.
Chickens.
Platypuses.
Alligators.
And DONKEYS! It's the truth!"

A donkey will be a great help to Bear in his quest to establish a fine farm, but ... Fox will not be thwarted, and Bear becomes the proud parent of a donkey egg. Hare comes by and tries to persuade Bear that sitting on the egg will not help it hatch. Unconvinced, Bear keeps sitting and Hare returns to racing. Bear spends a great deal of time (all dealt with in sidebars describing its passage) warming, rocking, telling stories, and playing with the egg.

It takes a spider about an hour to spin a fancy web.

Bear proves to be a fine parent. Despite all the attention given, there is no donkey.

Full of purpose and positive thoughts, Bear refuses to give up on his egg. When fatigue overwhelms, a terrible accident reveals the truth. Disheartened, but pragmatic, Bear sees promise in the seeds he finds in the demise of his egg. Bear and Hare work together to till, weed, plant and water. In the end, the sale of the watermelons grown result in a big surprise for Fox.

The farm setting, and these lovable, familiar characters (Tops and Bottoms, 1995) have me hoping that sisters Janet Stevens and Susan Stevens Crummel might return with another story about Bear and Hare, sooner than later. It is lovely to meet up with them again in this endearing and humorous tale of friendship, tomfoolery, and poetic justice.

The short rhymes and the overall rhythm of the telling have me including it for today's post. The joyful mixed media artwork is sure to capture kids' attention as it is read. From the cantankerous, lazy Bear and the energetic, helpful Hare to the sly fox and the mysterious 'egg', they will be captivated. 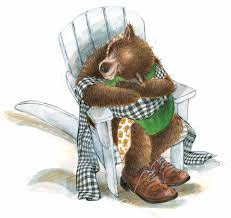