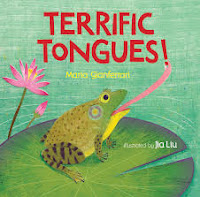 An okapi's tongue is like a
washcloth. Okapi tongues
are so long that okapis can
use them to wash their eyes
and ears."

The format for this book that introduces its audience to twelve tongues belonging to a variety of creatures will appeal while also providing new learning. Readers are invited to guess what owns the tongue being described. As you know, young readers love being involved in solving mysteries, and shouting out their ideas. The book also acts as a perfect mentor text for children who want to share research data about something they are studying. The format is consistent throughout, and results in an effective and satisfying read.

Each turn of the page discloses the animal whose tongue has been described. I was fascinated to learn much about tongues that I did not know. Children are sure to feel the same, even if it is a creature they find familiar.

Dog tongues work like mini-air conditioners. Dogs stick
out their tongues and pant to get rid of heat. Quick
breaths chill blood in the dog's tongue, which circulates,
cooling the rest of the body."

This accessible and instructive text following the reveal is useful and appreciated. The creatures are varied, and backmatter adds to the learning from the main text of the book.

"An okapi's tongue is prehensile, which means it's used for
grabbing things. It's also sticky, so it's perfect for plucking
faraway leaves from their branches. Okapis live in the
rainforests of the Democratic Republic of the Congo in Central
Africa."

Additionally in backmatter, there is a final section called EVEN MORE FUN TONGUES! Here readers will find a select group of creatures and a short description of what is special about their tongues and what they use them to do.

"Like snakes, komodo dragons have long, forked tongues as well as
Jacobson's organs to smell and detect prey from miles away."

Now, where will a reader find a book about komodo dragons?
Posted by Sal's Fiction Addiction at 12:43 PM