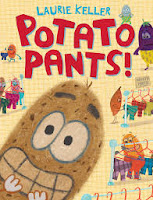 "Hello, Grocery Store?
Do you have any potato pants?

Yeah, ya know -
PANTS
that are
made for
POTATOES.
We don't have
Potato Pants."

You will need a lot of energy to share this book with little ones, and a willingness to read it repeatedly. It is exactly the kind of story that makes them laugh and beg to hear it again.

It is pretty silly, and that is what makes it such fun as a readaloud. It begins with Potato doing the Robot. The reason? He is very excited about a 'one day only' potato pants sale at Lance Vance's Fancy Pants Store. Say that five times as quickly as you can. The language is lively, filled with emotion, and much appreciated humor.

"WHAT'S THIS? POTATO IS UPSET!
(That's why he stopped doing the Robot.)

You can hear that wordplay, can't you?

The two have clashed previously, and Potato is determined he will not be outdone by the eggplant in his quest for a pair of potato pants. Still, he does not want to be in the store at the same time as the eggplant. He bides his time, until he can't stand it any longer. What happens next will surprise readers and result in a solution to their dilemma.

The artwork is as much fun as the text is. Kids will patiently give the time it takes to ensure they don't miss a single detail on the action-filled pages.
Posted by Sal's Fiction Addiction at 9:51 PM