Buddy and Earl meet the neighbors, written by Maureen Fergus and illustrated by Carey Sookocheff. Groundwood, 2018. $16.95 ages 5 and up 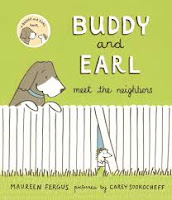 "Tell him to back off, Buddy," said Earl in a muffled voice. "Tell him if
he makes one false move, you'll zap him with your laser-beam eyes!" The bulldog looked so alarmed that Buddy quickly said, "Do not worry. I will not zap you with my laser-beam eyes. I do not even know how to turn them on. "Thank goodness," said the bulldog. "My name is Mister. I'm sorry if I scared your little friend."

Earl is quick to report that he was not at all scared, despite the shrieked AHHH! I am so happy to see these adventure-seeking friends again. You may or may not have met them yet. If not, you are missing out on some hijinks, a lot of inspired dialogue, and a continuing series that is sure to become a class and family favorite.

Buddy is a dog, Earl a hedgehog. They are faithful companions in their household, and put up with each other through thick and thin. Their conversations and misunderstandings evoke giggles at every turn, and in each of their, now five, adventures.

This time Earl decides they are superheroes, Wonder Buddy and Super Earl. Their mission, should they choose to accept it, is to recapture The Evil Doctor Stinker. Using the Earl-mobile, they discover a hole in the fence that leads to the neighbor's yard, said to be the secret lair of the escapee. And that is how they meet those neighbors ... a cat named Snowflake, who quickly insults Earl by calling him a mouse and Mister, a bulldog.

The adventure? Well, it turns out that Snowflake is a bit of a braggart. She quickly becomes the victim of her own bravado, and needs rescuing. It's Super Earl to the rescue!

"Super Earl got Wonder Buddy to help him
onto a launching pad.
Then he flapped his arms as hard as he could.
"It's no use," he roared. "My powers
are obviously being blocked by a diabolical
supervillain! We're going to have to try Plan B!"

What is Plan B? Can Earl save Snowflake from certain disaster?

If this is your first book, be sure to look for the others in the series.