The Tree in the Courtyard: Looking Through Anne Frank's Window, written by Jeff Gottesfeld and illustrated by Peter McCarthy. Alfred A. Knopf, Random House. 2016. $23.99 ages 6 and up 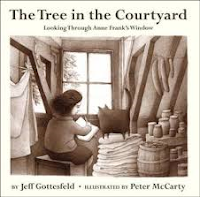 "The older girl was quiet and proper. The younger was lively, with dark hair. When they visited the factory, she would play by the canal or write by the kitchen window. She wrote for hours. Even when her father called her, she wrote. The tree loved the sight of her."

Choosing a tree to tell the Frank family story during World War II in war-torn Germany allows Anne's story to be shared with a younger audience, without chronicling the many horrors of the time. Anne described the chestnut tree that stood outside the window of the annex, where she and her family lived for two years, in a diary entry:

"The two of us looked out at the blue sky,
the bare chestnut tree glistening with dew,
the seagulls and other birds glinting with silver
as they swooped through the air, and we were
so moved and entranced that we couldn't speak."

Granted the story is limited to what the tree can see happening in the streets (and not do anything about it), and in the house that its shade protects. It watches through the curtained window of the attic that houses eight people as they seek shelter from the Nazi regime and its determination to annihilate the Jewish people living there. The tree watches as the energetic and gregarious Anne writes in her diary, and is an observer to her first kiss. After the family is taken away, the tree keeps watch through
passing seasons and years.

The tree, of course, does not understand why the family must be there for such a long time; nor, can it reason why they have to leave. In that way it echoes some of the feelings that many readers will have about the fate of so many, and the reason for such a war to have happened.

Never dramatic, yet always touching, the author writes of those moments that are so defining in stories told about Anne, her diary, and her life in hiding. The father's return at the end of the war, his discovery of Anne's diary, and the tree that lived for so many years, keeping watch. Then, as life had come to an end for Anne, so does life for the 172 year old tree.

"The summer the girl would have turned eighty-one,
a storm snapped the tree's trunk in two.

In an afterword, Jeff Gottesfeld adds information about Anne and the tree. While Anne lives on in the pages of her diary, the tree's saplings have been planted at a variety of American locations, all 'notable in the quest for freedom and tolerance'.

Peter McCarty's wondrous sepia artwork reflects the sombre tone of the events, showing readers just how sad and serious the situation was for the people who found shelter near the tree's lofty branches.
His shapes are softly rendered, the fine details add realism to the story told. The portrait of Anne in the final pages is quite lovely.
Posted by Sal's Fiction Addiction at 10:00 AM