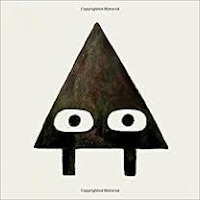 "One day Triangle walked
out his door and away from
his house.

He was going to play a
sneaky trick on Square.

Just look at that cover, and tell me you haven't been eager to read another book by this formidable team. When Mac Barnett and Jon Klassen put their heads together, you know you are going to love the results. After Extra Yarn (Harper, 2012) and Sam and Dave Dig a Hole (Candlewick, 2014), you cannot help but highly anticipate their next collaboration.

They do NOT disappoint! We meet Triangle first. He lives in a triangular world, in a house that is a triangle with a triangle for a door. The triangles are different sizes, and some have changed over time. His friend, Square, lives in a square-shaped world, similar to Triangle's but for that pervading shape.

As he heads away from his house one day we learn that he has plans to play a 'sneaky trick' on his friend. His journey is long. His plan is in place. Triangle knows his friend well, aware that Square is terrified of snakes. So, he stands outside his door and HISSES! As expected, Square is frightened until he realizes that Triangle is playing a trick. The chase is on! All the way to Triangle's house where Square accidentally finds himself stuck in the triangular entrance.

That accident sets a fear of its own in Triangle. Square quickly responds that his sneaky plan is now complete.

The reader is left to answer the question: " But do you really believe him?"

So much mischief and fun! Those eyes! They are brilliant. You will be sharing this often, and can bask in the knowledge that this is just the first book in a planned trilogy. Huzzah! 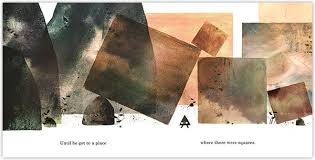