Meatless? A Fresh Look at What You Eat. Written by Sarah Elton and illustrated by Julie McLaughlin. Owlkids Books, 2017. $18.95 ages 9 and up 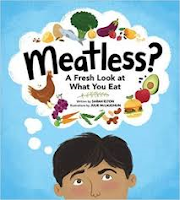 "Like meat-eaters, vegetarians also eat eggs and milk and honey. They eat bread and rice and pasta and all sorts of grains. What they don't eat is food made from the flesh of any animal - including fish. (And in case you were wondering, there is a name for someone who doesn't eat meat but does eat fish - pescatarian.)

The world is changing - and in many ways. While people of the world are eating more meat than they ever have, there are also more and more who are choosing a vegetarian diet. It is a conversation that is taking place for many. To eat meat or not?

In this informative and relevant book, Sarah Elton provides a look at vegetarianism and why people are looking toward change. She also includes reasons that explain what motivates people to choose not to eat meat. Her introduction describes a day at a farm where she takes part in the killing of a chicken. While she still eats chicken, the experience did make her more curious about people who choose not to eat meat:

"I wanted to see meat from the
point of view of those who've
thought hard about it. What I
learned is that the question of
whether or not to eat meat is a
whole lot more complicated - and
interesting - than I ever imagined."

We are the readers who benefit from all that Ms. Elton has researched. In four parts, she examines A History of Meat-Eating, Why Go Vegetarian, If Not Meat, Then What, and Becoming a Vegetarian.

It is an in-depth look at health and how growth in meat consumption, the fact that many people have meat at every meal, and the spread of a love for meat are now being felt in countries that have not historically eaten much meat at all.

As she looks at the history of eating meat, she takes us back thousands of years to a time when hunting and gathering was the way of life. As far back as 25 million years animals were eaten. Later, if crops failed, people had to turn to other foods to keep them from starving. They didn't choose animals simply for the meat. Those animals provided other sustenance as well. Traditions have changed throughout the years, and so have beliefs about meat eating. Different religions influence the choices that some people make.

In the second part she discusses the many reasons that people might consider a vegetarian lifestyle, or a move toward it. There are many concerns about the effects of growing meat to feed so many and how we might make a difference. Something as simple as Meatless Monday can have an impact. Others are concerned about animal welfare, and the high cost to the environment as they are raised to feed so many. Can we keep production high enough to accommodate those who eat meat? It is a valid question.

The third part considers what we might eat to replace the consumption of meat. She lists sources where we can find protein, minerals, fats and vitamins that have traditionally been provided through our meat-eating habits. What about plants and their benefits? Many cultures of the world provide needed nutrients through plant-based dishes.

Finally in part four, the author helps us understand choosing vegetarianism as a way of life. She talks about assuring that protein is a part of a daily diet, that there are substitutes to replace meat in a daily diet, the foods we should avoid, and the need to learn to cook from scratch. Thus, we can avoid all the additives that have proven unhealthy for many. She adds a weekly menu for a meat-free diet ... it looks delicious and healthy.  She also talks with five kids who are vegetarian or vegan, bringing their stories to her readers.

Interesting, impressive and accessible, this book will help kids and their parents to understand a different and perhaps healthier lifestyle.
Posted by Sal's Fiction Addiction at 9:41 PM