Adrift At Sea: A Vietnamese Boy's Story of Survival. Written by Marsha Forchuk Skrypuch with Tuan Ho, and Illustrated by Brian Deines. Pajama Press, 2016. $22.95 ages 8 and up 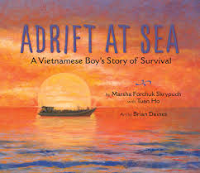 "I jump over rocks and
bushes, running to the boats. Guns fire. One bullet pierces a clump of dirt by my foot. I stumble and roll, head
over heels. I get up and keep running. Soldiers shout. My heart pounds."

Today we are all aware of the refugee crisis that grips the world. Too many people are forced to flee their homes in search of safety and a better life, away from the strife and danger in their own villages, towns, cities, countries. We see their faces, hear their stories and share their hopes for a happier future.

In 1981, the 'boat people' from Vietnam are struggling to deal with what has happened in their own beloved country. They, too, see their only hope is in leaving. Tuan Ho's father and sister have been gone for a year, looking to find a home for the rest of their family and sponsor their journey to Canada. Today, after school, he learns that preparations have been made for the rest of the family's  flight to freedom. They must leave their smallest sister behind, as she is too young to be taken safely.

Trucked to the sea and running from the soldiers' bullets, they board a skiff filled with 60 people and begin their four day journey. On the second day the skiff springs a leak, on the third the motor dies. They are adrift for three more harrowing days - with little food, almost no water, a blazing sun, and hope. Their rescue comes in the form of an aircraft carrier whose crew brings them on board, gives them food and refuge.

The authors include personal photographs of Tuan's family, before their escape and following their  settling in Canada, to help readers understand this historical moment in time. Added information includes a map, archival and family photos, and an explanation for the need to leave.

"It is a testament to how horrible life was that so many thousands of Vietnamese were willing to risk their lives for a chance to escape. For twenty years following the Fall of Saigon, people tried to escape Vietnam any way they could. The only way out was by sea, and those who could afford it would bribe government officials in order to get their documents and a boat. Those who didnt' have the money had to sneak away secretly and without travel papers. Rich or poor, they all ended up in boats not made for long travel on open water."

The dangers were many, their journeys harrowing, and the time spent in refugee camps often too long. Still, they stayed the course and eventually many settled in "the United States, France, Australia, and Canada."

Brian Deines (as he always does) has created truly beautiful artwork using oils on canvas to bring Tuan's story to this book's readers. From the lush, tropical street in Ho Chi Minh City, the dark seashore, the blistering heat of a sun-filled sky, the clear blue beauty of the sea beneath them where dolphins play, to the almost overpowering arrival of the aircraft carrier, we journey with the family as they make their courageous way to a new life.