"When they reached home,
Henry woke just as Papa
turned out the light.
Immediately, Henry
realized something was
wrong. "Papa, where is Leo?"
he asked.

Henry and his family searched
high and low, inside and out,
but Leo was nowhere to be found."

Henry is a gentle-mannered boy whose surroundings include a variety of stuffed toys. Not one of them is loved as much as Leo, a stuffed lion given as a gift for Henry's second birthday. The two have been together since that day. Henry loves Leo and believes in him, knowing his likes and dislikes and not afraid to share those with his family.

When a plan is made for a walk in the Nearby Woods, Henry is happy and lets everyone know that Leo loves the woods. His sister scoffs! She knows that Leo is not real. Henry begs to differ. Off they go for a leisurely, long walk. When the sun begins to set, the family returns home. Observant listeners will note that when Henry falls asleep on his dad's shoulders, Leo can no longer be seen. Henry is the first to realize that Leo has not made that trip home. They look; it is too dark to see much. A promise is made to look again in the morning. Henry fears for his best friend.

The story slips quietly into a series of wordless spreads, showing Leo in the Nearby Woods with the other 'stuffies' from Henry's bedroom. They are now life-size and work as a concerned group to lead Leo home to the safety of the home he draws for them, exactly where the family finds him as they begin their search at sunrise. It is a heartfelt welcome for both Henry and Leo. So much love!

The mixed-media artwork transports readers to a dreamy world that is textured and captivating. They will want to take time to carefully study the pages filled with animals and the calm beauty of the  woods. Please encourage close attention to the endpapers as they complement the story's action, and answer questions they might have as they explore this story filled with love and wonder. 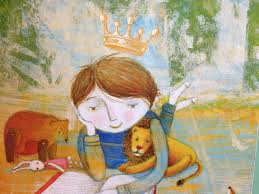