We Will Not Be Silent: The White Rose Student Resistance Movement That Defied Adolph Hitler, written by Russell Freedman. Houghton Mifflin Harcourt, Raincoast. 2016. $23.95 ages 10 and up 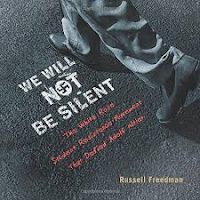 "Hans quickly formed friendships with several of his fellow soldier-students, members of the army medical corps. They were drawn together by their shared enthusiasm for books and music and by their opposition o the Nazi regime, which they dared discuss only among themselves."

I so admire the work that Russell Freedman does to bring the importance of history to young readers. In his latest book, he shares the story of the White Rose resistance that was initiated by a group of university students in Germany in 1942.

Adolph Hitler and those who worked with him continued to repress the lives and movements of the German people. Hans and Sophie Scholl's growing discontent with the way they were being treated as members of the Hitler Youth groups led them to take a stand. Many of their young university friends needed little encouragement to join the White Rose Movement and to help them distribute the pamphlets they wrote concerning Hitler and the Nazis.

The Nazis were not about to be one-upped, and worked tirelessly to find who was responsible for the printed words that urged their countrymen to denounce the evil that was at the heart of Hitler's government and policies. The students knew that they were risking their lives; if caught, they would surely be sentenced to death for their treasonous ways. They continued on. They printed their pamphlets in secret and distributed them in various ways. What began in June 1942 led to six handouts being written and distributed throughout Germany. Their arrest the following February was followed by a quick trial and execution by guillotine for the siblings.

An inspiring story told clearly and with purposeful thought, this is classic Freedman work. He allows his readers a careful look at the courage it takes, despite the dangers, to stand for what you believe in. The Scholls and their friends went to their deaths knowing they had done the right thing by standing for good intentions versus the monstrous evil of the Hitler regime. Their story is but one part of the events of WWII. Because of Russell Freedman's powerful writing, we will not soon forget
them.

The personal and other archival photos included throughout the text are important and telling, as are the source notes, selected bibliography and index. Pair this book with The Boys Who Challenged Hitler by Phillip Hoose (Farrar Straus Giroux, 2015).
Posted by Sal's Fiction Addiction at 3:52 PM