Thunder Boy Jr. Written by Sherman Alexie and illustrated by Yuyi Morales. Little, Brown and Company, Hachette. 2016. $21.49 ages 5 and up 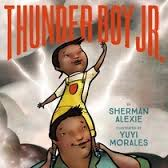 "Don't get me wrong.
My dad is awesome.
But I don't want to have
the same name as him.

I WANT MY OWN NAME.

Are there many of us who have not, at one time or another, had a fervent wish for a different name? The boy narrator of this wonderful and very funny book is named after his dad, Big Thunder. He is a Junior; most refer to him as Little Thunder. He doesn't like it, and he makes a case for having any other name than that. He wants his own name, one with pizazz and meaning. While his take on the situation is often humorous in its presentation, his story has a lot to say about the relationship between fathers and sons, family traditions, independence and ownership.

"I love playing in the dirt,
so maybe my name should be

MUD IN HIS EARS."

Finally, it is Dad who suggests that his son should have a more appropriate name - one that is his alone. Sherman Alexie's first picture book will surely not be his last. While a departure from his previous work, it is also filled with heart and humor. Readers will love it!

Yuyi Morales' illustrations are described as having been 'made from the remains of an antique house in Xalalpa, Mexico, where Yuyi now has her studio and where she created this book. When the rotting roof and some of the walls came down, she picked out old wood as well as clay bricks that she later scanned and used their colors and textures to digitally paint the illustrations." Artists are an amazing lot! I wish that each book I share here had such a description of the artist's process for creating the work we so admire.

The colors are bold, the thick black outlines make them stand out on the page, giving them a three-dimensional quality, and they are full of expression. Ms. Morales brings glorious life to this young native boy and his family as he shares his dismay and discontent.  Speech balloons, changing fonts, and action-filled pages are sure to appeal. I guarantee that you will be asked to read this lively, thoughtful book again and again. 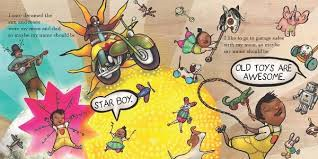