The Secret Subway, written by Shana Corey and illustrated by Red Nose Studio. Schwartz & Wade, Random House. 2016. $23.99 ages 8 and up 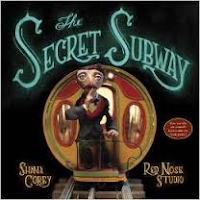 "Now a new army of workers arrived carrying paintbrushes and plaster, curtains and mirrors. When they were done, Devlin's basement resembled a fairyland. Perfect! thought Alfred Ely Beach. It was time to share his secret. A few days later ... "

Have you ever stopped to consider the origin of the subway system in New York City? If you have not, as I had not, this is an account that you are sure to find most interesting.

In the mid-nineteenth century, Alfred Ely Beach had a great idea!
Why not build an underground train in New York City to avoid all the congestion and noise to be found above the ground?

With permission to build two pneumatic mail tubes, he began. He did that; he also designed a short working subway that would run from one Manhattan street to another. He had a short tunnel built, used a single car, added the machinery that would make it move pneumatically and voila! a new method of getting from one place to another ... all below the ground. The tunnel was purposefully short and meant to show the political machine it could be successful.

History is alive with grand ideas that have only minimal success. Beach's idea was brilliant, and forward thinking. Unofficially, Boss Tweed had great power at the time and was able to put a stop to any such project. In telling the story, Shana Corey brings history, science, corruption and secret doings to the forefront in descriptive, clear text that is as informative as it is fascinating to her intended audience.

Immediately remove the book jacket to get a step-by-step look at the artist's process for creating the incredible illustrations that so perfectly match the author's text. What amazing work it is! The attention to detail will have readers poring over each and every page, often returning to favorites for continued enjoyment. The vintage photos used as backdrops are a visual delight and add depth for understanding the city at the time.
An author’s note offers a bit more detail, and leads to the opening of the famed subway system in 1904. A suggested bibliography and a list of Internet sources will be helpful to those wanting to know more.

https://youtu.be/AaAZYNBPiwQ
Posted by Sal's Fiction Addiction at 11:27 AM