There is a TRIBE of KIDS, written and illustrated by Lane Smith. Roaring Brook Press, Macmillan. Raincoast, 2016. $20.50 ages 3 and up 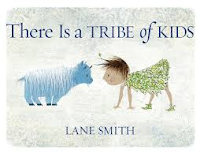 Oh, Lane Smith! You do the work you do so beautifully! I am ever anxious to see what Mr. Smith has up his sleeve and have long been a fan of his exemplary work. This new story is built on the concept of collective nouns. It has at its heart a young and inquisitive 'every child' who wanders the natural world making discoveries about the animals that inhabit it.

The child begins this trek surrounded by a 'tribe of kids', enjoying their company and hugging them goodbye as their mother leads them up a nearby craggy ridge where they can no longer be reached.
Next up is a 'colony of penguins' whose dancing antics provide exercise and enjoyment before they slip through a crack in the ice and swim away.

Each turn of the page brings new adventure and new animals to delight the imagination and add new vocabulary for young readers. Each goodbye is full of melancholy, while also leading to a new discovery. Bobbing with jellyfish, spouting with whales, soaring with ravens ... every new group is a source of pleasure for the young traveler.

The day passes, and soon the joys inherent in all of these new discoveries wear a bit thin. Fatigue
overcomes as dusk sets in; night passes with other enchantments; morning brings a shell trail to follow and a most welcome revelation that brings the child full circle. Awesome!

The artwork is described: 'The illustrations in this book were painted in oils and sprayed with an acrylic varnish to create various mottled textures. Also used were colored pencils, graphite, traditional cut and paste, and digital cut and paste.' All done brilliantly and with Lane Smith's signature texturing and subtle use of color that changes as the mood changes.

What a celebration it is!
Posted by Sal's Fiction Addiction at 7:06 PM