Elephant Journey: The True Story of Three Zoo Elephants and their Rescue from Captivity. Written by Rob Laidlaw and illustrated by Brian Deines. Pajama Press, 2015. $19.95 ages 6 and up 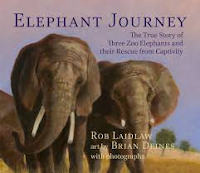 "When they were babies, Toka and Iringa roamed with their families in the warm, dry climate of southern Africa. They explored a vast territory, with hills to climb and streams to cross. They foraged for grasses, fruit, branches, and bark."

I have long admired the work that Rob Laidlaw does to help protect wild animals from the indignity of being held captive, whether by a circus or a zoo. His books for children have informed, enlightened and encouraged readers to get involved in making a difference in the life of any animal.

In his newest book Rob tells the story of three elephants from the Toronto Zoo who are eventually moved to a healthier place, where they might live their lives as they were meant to be lived. Their story is compelling and caused a lot of anxiety for those who love animals.

"The zoo in Toronto was nothing like Southern Africa. The ground was hard and dry, and uncomfortable on their feet. The enclosure was too small to roam about, so without exercise, the elephants gradually became weaker and out of shape. And it was cold in the winter, too frigid for elephants used to the warm sun of southern Africa.

Toka, Thika, and Iringa were the last elephants at the zoo in Toronto. Two years of wrangling over where the elephants should really be led to a final decision by Toronto City Council to move them to California. Another decision was made to ship them on flatbed trailers that had been equipped with specially designed crates to keep them safe during their extremely long journey.

Once loaded, they were off. With experts monitoring their condition from an accompanying van, the carefully planned trip was carried out, with only a few minor glitches. They were warmly welcomed by staff, and other elephants, when they arrived at the PAWS sanctuary. Given time to acclimatize, the elephants were soon set to explore their new home and begin healing. They were soon healthy, happy and much stronger.

Brian Deines' fabulous oil paintings chronicle their trip. His paintings were made using footage from the trip, and accurately portray for interested readers the joy and bravery of these magnificent pachyderms as they journeyed across a vast land to a more suitable home

Back matter includes clear and appealing photographs, captioned with accurate and much appreciated further information. An Acknowledgements section, and an index can also be found there ... as well as a sad note from the author:

"Sadly, Iringa's long history of degenerative joint and food disease - the leading cause of death for elephants in zoos - caught up with her and she was humanely euthanized on July 21, 2015. She was 46 years old. Iringa was born in the wild but spent most of her life in zoo captivity. I'm so glad she had a chance at the end of her life to roam the hills, eat natural vegetation, and enjoy a peaceful life in the company of other elephants. Iringa will be greatly missed."