Maple & Willow Together, written and illustrated by Lori Nichols. Nancy Paulsen Books, Penguin. 2014. $18.99 ages 3 and up 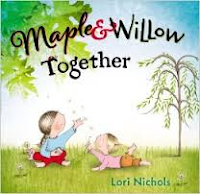 I'm happy to see Willow growing up to be the little sister that Maple didn't know she was hoping for in Lori Nichols first book about them, (Maple, 2014). The two remain fast friends: enjoying each other's company, speaking their own language, building, catching and playing.

Once again, Ms. Nichols' uses pencil on Mylar and digitally colors her charming depictions of sisterly love, keeping the maple and willow trees prominent in the backgrounds. Her use of white space allows young readers to focus on the two girls, their activities, their expressions and the discoveries they make about growing up.

It isn't until Willow has a problem with the order of numbers that Maple has a bit of a meltdown. If you have children you will understand, having been witness to such blips in the way their days go. It doesn't take much to turn the world upside down for them.

Maple, always helpful with and protective of her little sister, is now ill-tempered and selfish. It matters not to Willow:

Days pass and the two agree to disagree ... until Willow takes a stand. Willow is 'admay!' and takes her anger out on Maple's toy. WORLD WAR III! That's it for both of them. For their parents, too. Time out is called and each is restricted to her own room. It is inevitable with siblings, isn't it?

Left to their own devices and with alone time to think, the two come to an understanding.
Posted by Sal's Fiction Addiction at 11:19 AM