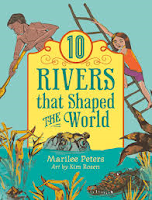 "The Amazon has a staggering 1,100 tributaries ...Those rivers widen into thousands of lakes, and every year for months at a time the Amazon floods hundreds of kilometers of tropical forest. Sometimes the forests are drowned under 13 meters (43 feet) of water. South America sinks by 8 centimeters (3 inches) every year because of the extra weight ... "

If you watched the news concerning the floods in Texas and Oklahoma last month you will have some idea of the power that is possible when dealing with mighty rivers. In this book, Marilee Peters gives her readers a close look at some incredible stories concerning human history and the roles played by 10 rivers.

The rivers considered are the Awash, Tigris and Euphrates, Nile, Rhine, Amazon, Zambezi, Thames, Mississippi, Ganges  and Yangtze. Their stories are told with compelling text, archival and contemporary photographs, and outstanding original artworks. As you read you will be impressed and surprised by the influence that each of the rivers researched for this fine nonfiction book have had in the grand scheme of things in our world.

Ms. Peters is a convincing storyteller; she grabbed my attention from the first paragraphs of her introduction:

"For Mao Zedong, the leader of China from 194 until the 1970s, the answer was simple: swim across the Yangtze, the country's biggest, strongest, most famous river. So that's what he did. When he arrived dripping and breathless on the far side, the whole country considered him a hero, and Mao was able to stay in power long enough to shape the future of China."

Throughout the book, the author uses her storytelling ability and the plethora of information she gathered during her research to make her book compelling and memorable. She uses a historical character, makes a connection to a river and its impact. From a mother ape searching for food for her hungry babies caught in a flash flood and found three and a half million years later by paleoanthropologists, to Li Pang who helped Sun Yat-sen navigate the Yangtze to his new place in Chinese history, she entertains her readers with the power that rivers hold.

I was fully engaged in the reading start to finish; now, I know so much more than I ever thought I wanted or needed to know about rivers of the world, their influence and the roles they continue to play in all parts of the world. The design is striking, while also being entertaining and very accessible. A glossary, source list and index are welcome.

What a terrific resource it is!
Posted by Sal's Fiction Addiction at 11:21 AM