President Taft Is Stuck in the Bath, written by Mac Barnett and illustrated by Chris Van Dusen.Candlewick Press, Random House. 2014. $19.00 ages 5 and up 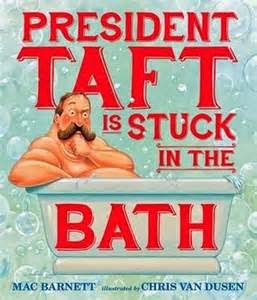 "Mr. Secretary," said Taft. "I'm stuck in the bath." "Hmmm," said the secretary. "A huge vat of butter should do the trick. We'll have fifty farmers milk fifty cows. If Congress spends the might churning, we should have enough. We'll grease up your sides and the sides of the tub. Then it will be easy. You'll slide right out!"

Funny how old stories stick...is anyone sure that President Taft got stuck in the bath? It surely won't matter to the young children who get a chance to listen to this lively, silly tale. Mac Barnett doesn't mind not knowing the truth. That being said, he happily imagines what it might have been like, and Chris Van Dusen applies his comic talents to bringing the text to a sure-to-be-attentive audience.

Tongue in cheek, these two funny men take a page from history and run with it! And it is funny to see the rotund president sitting in his bathtub surrounded by the opulence of the White House, and the many subordinate officials who come to his aid. His wife makes the call when she realizes that he has been 'in the bath' for an extended time.

Their suggestions are numerous. The Vice President is ready to accept his new post as president. That will not do. With each new person called, the ideas become more preposterous, while always being related to the job held:

In the meantime, the vice president is persistent in his plan of action; and, in the end, it takes a team to get his out.  Did I mention it may have been inauguration day? It doesn't need to be a special day to share this funny tale with youngsters. They will love the action, the humor, the embarrassment. Just listen for the giggles!

Don't miss the author's note, an archival photo of the President's custom-built tub, and a list of facts 'pertaining to President Taft and bathtubs'. 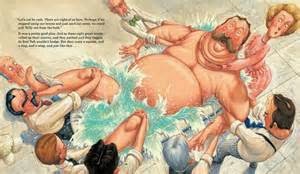