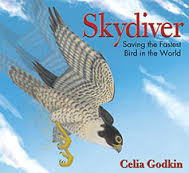 "Over the next few days, the female peregrine lays four eggs. They rest in a shallow depression the pair has scraped out on the ledge. While the large female guards the eggs from predators, the smaller male hunts for both of them."

At one time, we had peregrine falcons nesting on one of our downtown buildings. I am not sure that they are still there, and couldn't find any recent information that would assure me that they are. That doesn't change the fact that I was really interested in reading Celia Godkin's newest book which is subtitled: Saving the Fastest Bird in the World.

The fastest bird in the world? I had no idea. It upped the ante to find our more about them. Find out more I did:

"Wanting to impress the female with his mastery of the skies, the male greets her with a spectacular aerial display. First he flies high in the sky. Then, with breathtaking speed, he plummets toward the earth. No animal on earth travels faster than a diving peregrine."

I did not know that, and so much more!

The informative text and detailed accompanying artwork show young readers the birds in their airy habitat, on the edge of a rock ledge. After hunting for needed food, the male is on his way back to the nest when he spots people nearby. One of those people climbs down to the nest, carefully removes the eggs and climbs back to the top of the cliff.

What is she doing? We learn that she is a researcher who knows that the female will lay other eggs this season, and there is no need to be concerned. Only one of the three new eggs produces a chick. Not to fear, the first clutch will be raised by humans, in hopes of ensuring the peregrine's future:

"The team takes the eggs to a sanctuary and places them in an incubator. In this warm, protected place, the fragile eggs have a better chance to survive. Sure enough, three weeks later, four downy chicks hatch into a strange new world."

The author assures that  her readers understand  the danger that these beautiful birds have faced, and how their numbers are improving because of  the care and concern shown by leading scientists. Of course, the chicks cannot always be protected from their natural predators; so, other measures are put in place to try to ensure their survival.

An author's note encourages readers to find out more and includes this startling statistic:

"Estimates vary, but one National Geographic team clocked a peregrine in a power dive at 242 miles(387 kilometers) an hour."
Posted by Sal's Fiction Addiction at 8:09 AM