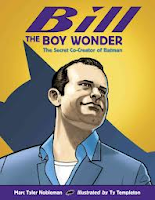 "Bill liked to ride through the city to think. As the bus picked up passengers, Bill picked up plots from street scenes and daydreams. He recorded stray facts – the boiling point of mercury, the Chinese character for virtue, what happens when a dog’s nose gets cold – in what he called his “gimmick book.”

Bob Kane was not the only creator of the Batman comic book. In fact, he asked Bill Finger to help him design and further develop his original idea. It was also Mr. Finger who wrote most of the Batman stories while Bob Kane drew some of them. But, Bill Finger was kept mostly under wraps and the general comic buying public knew nothing of his 'secret' involvement.

When Marc Tyler Nobleman takes up his story, it's 1933 and Bill Finger has already finished his high school education. Bill is brimming with ideas and when he meets Bob Kane at a party, they collaborate to have a few comic books published. Bob writes the stories to accompany Bill's art. The author then discusses the connection between the two as they developed the concept for a new superhero.

Bob Kane made a deal to have the comic published without mentioning Bill's name or input. Soon, Bill was secretly doing all the writing, and other artists were hired to do the drawing. Yet, it was Bob Kane's name on each edition. While Bill was upset with Bob getting all the credit, he was happy to be working and didn't want to rock the boat. Instead, he created a vulnerable and emotional Batman who became a hero.

People in the industry soon heard that Bill was doing the writing. They were suitably impressed which led to more work, and a problem with getting his stories in on time. But, they were so good!
Only once in the first twenty-five years did his name appear in print. Then, in 1964, it was made public that Bill had much more to do with Batman than had ever been disclosed.

Readers learn the rest of Bill's story, beyond his death in 1974 to the creation of a Bill Finger Award for Excellence in Comic Book Writing, established in 2005. A most worthy honor:

"From Milton to Bill, from salesman to Batman, from secret co-creator to unsung legend, Bill's most important story was not one he wrote but the one he lived."

In an extensive author's note, we learn how meticulous the research was for this very fine picture book biography. Little has been written about Bill Finger. Marc Tyler Nobleman writes that wrong. He includes a section on source notes, a bibliography and a photograph of the only known note written by Bill Finger.
Ty Templeton's artwork gives the book an authentic Batman flavor, with bold images and a clear sense of the world in which Mr. Finger lived and worked.