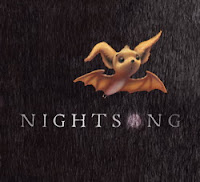 "His mother folded him in her wings and whispered into his waiting ears, "Sense is the song you sing out into the world, and the song the world sings back to you. Sing, and the world will answer. This is how you'll see."

What a lovely book this is to share with little ones who might be feeling frightened over some new exploit. Chiro is a little bat who has been learning from his mother since birth. It is  time for a solo flight. His mother gives gentle and thoughtful advice, allowing her son to take it and make his first foray into the darkness alone.

She lets him know that he will be able to see in the darkness by using his 'goodsense' and it doesn't take long for Chiro to recognize what that is. Echolocation is a tough concept for young learners to grasp. In the whimsical and meaningful words of Ari Berk, Chiro's singing shows them exactly what
is happening as he makes his way to the pond where the bats from his colony feed.

He uses his 'goodsense' to find his way around trees, past a flock of geese and under a row of electrical wires until the pond was located. Once there, he eats his fill from 'thousands of tiny, flying, tasty things, each one humming a different tune'. His hunger satisfied, he is prepared to fly home. A tiny niggling thought comes to mind and he decides to fly beyond the margins of his own world. Now, he is all alone!

In that solitude, he continues to learn about the nighttime world and wanders until he feels the call of home, and his mother's warm embrace. Your audience will be thrilled to have shared his successful first flight, and with his willingness to step outside his comfort zone . Chiro is a brave little bat!

Loren Long surrounds Chiro with black inky night using acrylics and graphite for his adventure. The soft golden browns elicit the warmth and comfort of mother and child being together. The deep dark offers a feeling of danger while Chiro makes his way from safety to the unknown. I love the light that shines around him as he flies beyond the boundaries set by his mother. But, my favorite illustration when he is sitting by the pond, hunger sated and wings wrapped around a tiny, bulging tummy. So charming!
Posted by Sal's Fiction Addiction at 10:48 PM