Manfish, written by Jennifer Berne and illustrated by Eric Puybaret. Chronicle Books, Raincoast. 2008. $18.99 ages 8 and up 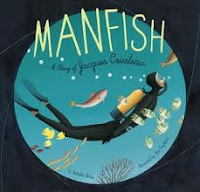 "Jacques spent his days playing, experimenting, and creating. He wrote little books that he illustrated with his own drawings. And he was fascinated by machines. He studied blueprints and built a model of a crane that was as tall as he was, and actually worked."

Last week I wrote a post about Barnum Brown, called Barnum's Bones. I was intrigued while reading it that he had been singularly devoted to bones and fossils as a toddler. Such was the case with Jacques Cousteau who loved water from a very young age. He loved its feel and how it made him think about the workings of nature.

He was a scientific minded boy, who dreamed big dreams:

"He dreamed that someday he would be able to breathe
underwater for real.

At night he dreamed he could fly. With the birds,
among the clouds, with his arms stretched out like wings."

His fascination with the workings of the world included movies; he had many questions about the process of film making. It led him to save enough money to buy himself a 'home-movie camera'. His career in making movies of his own was underway. It led him to different parts of the world, and to many other questions.

When a friend offered swimming goggles to wear into the ocean, it changed his life:

"Once again he went below into the magical underwater world. At that moment Jacques knew his life was changed forever. His eyes had been opened to the wonders of the sea."

He wanted others to know the joy that he was experiencing in this beautiful underwater world. He was able to design a case for his camera that kept it dry and allowed him to make his beloved movies about a world that few had experienced. He worked as well to develop a breathing apparatus that would allow people to stay underwater for long periods of time...the aqualung. With it, he had freedom to explore:

"Below the surface, Jacques swam and glided and dove. He
did flips and somersaults.

He stood upside down on one finger, and laughed
bubbles into the sea."

Imagine how he must have felt! But, his many years in the water later taught his something he would have preferred not to know:

"He saw that people, without realizing it, were slowly
killing the sea and its creatures, by dumping garbage and
poisonous chemicals into the ocean he loved so much."

Now, he made movies for a different reason. After showing the people of the world the ethereal beauty of the ocean, he now wanted them to see what was happening to that beauty and encourage change.

Eric Puybaret creates Jacques' world and fills it with shimmering light and detail-filled vistas that are sure to encourage a need to protect the ocean's stunning beauty. He uses cross-sections, panels, and a changing color palette to help us see why Jacques so loved this world. He makes me want to get out there and see it for myself!

In an author's note, Jennifer Berne encourages her audience to learn more about this remarkable man.
Posted by Sal's Fiction Addiction at 11:53 PM