William Shakespeare: His Life and Times, written by Kristen McDermott and Ari Berk. Candlewick, Random House. 2010. $24.00 ages 12 and up 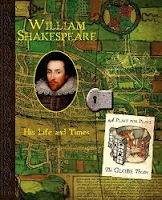 "It is not known exactly when Shakespeare arrived in London, but around 1592 he began acting, perhaps for Lord Strange's Men - the company that performed his first plays, about King Henry VI. By 1594, he was listed as an actor-sharer - an actor and equal partner in the most favored theatre company in England, the Lord Chamberlain's Men."

This excellent biography is written in scrapbook form, purportedly from Shakespeare to his daughter Judith. It is meant to let her know about his life as he has lived it.

He has been away in London for a long time and is preparing to leave his theatrical life there to return home to Stratford where his family has been living without him. He worries about the upheaval it might cause:
"I have spent too little time in the spacious "New Place" I bought for us all in Stratford - you and Mother will no doubt have settled in your own ways in your fifteen years of living here, which I now mar with my quills and books and London habits."

It is packed with memories of the time he has spent acting and writing, creating a memoir for his daughter that she might know about his childhood and the schooling that was his, his life in London and the plays he wrote and acted in, the men who were his mentors and co-workers, and the changes he experienced as he lived away from his family.

He moved to London with the best of intentions - to provide for his family. He talks about his plays and adds small booklets with descriptive passages about some of the most famous ones. He tells her that each one was influences by the historical happenings of the time. Readers will enjoy the common language of the telling, the many envelopes, flaps, and descriptions that give a flavor for the famous writer himself and the world that had such an impact on him. I was intrigued by all there was included here, and leave the reading with a real sense of Shakespearean times.

It is a great introduction to his works, and would be most appreciated by anyone just coming in contact with one of Shakespeare's more famous plays. It will also appeal to those interested in the history of the sixteenth and early seventeenth centuries. The illustrations create understanding for the conditions and add depth to the telling. Sidebars include factual information adding historical context to some of his entries. It ends with his last will and testament, and a letter to Judith expressing his hopes for her future happiness:

"Just as Prospero saw Miranda married most comfortably, so too shall I rely on your making your heart's match. No need to rush, of course - young Thomas Quiney is not yet full master of his trade...HA! Methinks I see your eyes flash and brows knit with annoyance at those words, and hear you make denial that you feel more for him than kindness. Well enough."
Posted by Sal's Fiction Addiction at 9:47 PM