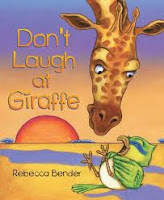 "The sound of the giraffe
clearing his throat
sparks the bird to flutter
around the giraffe's
sensitive neck.

I was very much looking forward to seeing this second tale about Giraffe and Bird. I so enjoyed Rebecca Bender's first story about the two (dare I say it?) friends. They were funny the first time, and she is able to keep the humor fresh.

It's obvious from the disgusted look on Bird's face and Giraffe's consternation on the title page that they have not yet settled their many differences. I am intent on finding out more. So, I flip the page and note their Savannah home, sunny and serene as all get out. Flip again and the complaints begin:

"No one would argue that Giraffe and Bird
are an odd pair. Spat, scrap, and squabble -
they almost always get on each other's nerves."

Despite that, they are most often together. But, there are so many things about the one that annoys the other, and vice versa. Giraffe hates Bird's undeniable delight with early mornings and the song that accompanies that delight. Bird hates the endless and annoying throat-clearing that comes from Giraffe's having such a long neck. Yet, they are friends and they seem to like doing things together.

Off they go to the watering hole where Giraffe encounters insurmountable difficulty. How does he dip to get a drink without getting his hooves wet? Can you fathom the dilemma? He stretches and cranes his neck, trying to lap the cool, refreshing water with his long tongue. In doing so, he becomes the butt of many jokes from the animals nearby, including Bird.

With Giraffe doing his best to find a solution, he falls into the water and is embarrassed by the taunting of the gathered animals. He slinks away to find moisture in a nearby muddy puddle. Bird, realizing that he has hurt his friend, 'has some thinking to do."

Can he find a way to right the wrong he has done to his friend?

The artwork is so expressive and appealing to the book's young audience. They will see the emotional reactions of each character clearly and know just how they are feeling. The colors are bright, the setting is lush and lovely, and the characters close-up and personal. I think that my favorite is a double page spread of the two friends facing the sadness of Giraffe's gaffe and the solution. But, I also love the constantly changing design and the many perspectives that give this funny (and tender) story life. As with the first, the author makes some sparkling decisions about word choice, encouraging an expressive and engaging shared reading.

We can only hope that we will meet these two again!
Posted by Sal's Fiction Addiction at 5:11 PM