unBEElievables, written and illustrated by Douglas Florian. Simon & Schuster, 2012. $18.99 ages 5 and up 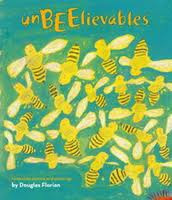 "My doting daughters feed my belly,
And I was raised on royal jelly.
My princely sons are known as drones -
Not one of those boys ever phones!
When it's too crammed,
Then I take wing.
With such a life -
Who needs a king?!"

Oh, Bret's going to hear about this!

I am the complaining mother of a grown son. I KNOW that he loves me and has no need to announce it telecommunicably as often as I would like. So, I am part of the same whining group as the Queen in this beehive!

There are fourteen new poems here, and each one introduces bees to readers in a variety of voices, and concern themselves with the hive, a bee's anatomy, the life cycle and on it goes.We are delightedly welcomed and encouraged to learn as much as we can about these busy, buzzing beauties.  The final poem concerns Colony Collapse Disorder and is an important part of the learning:

"Bees give us sweet honey.
They pollinate flowers.
The beeswax in candles
Keeps burning for hours.
But some hives have vanished,
Some bees disappeared.
(From mites or pollution
Or illness, it's feared.)
Let's hope that before long
The bees come back strong,
And hives will be humming,
Bees buzzing along."

This informative poem is accompanied by a short nonfiction paragraph further explaining CCD, and faces a watercolor illustration of one bee on a sea of greenish blue, eyes open in wonder and apparently unmoving.

Douglas Florian's skillful rendering of concise, meaningful poetry with carefully chosen informative prose and often humorous collage artwork is evident once more in his new book. I love the queen, resplendent in dazzling crown, with honey dipper sceptre in one hand and clutching a cell phone (surely waiting for an errant son to call home) in the other. The nonfiction paragraph adds the perfect final touch:

"The queen bee is fed royal jelly, a protein-rich paste, and eventually becomes the largest bee in the hive. Worker bees tend to all her needs, feeding and grooming her around the clock. During breeding season, the queen lays as many as 2,000 eggs a day, creating a colony of up to 80,000 bees."

Let me end with something that I feel very strongly...we should be sharing poetry with our kids every day. If we don't, they miss the joy and wonder of rhythmic language, articulate and talented writers, and the sheer fun of reading aloud with exuberance and shared laughter or tears. They will consistently discover new favorites and will soon be memorizing some without even working at it. If you have a reluctant reader, it's a great way to get them to try reading something that is not overwhelming and can be a lot of fun! Go for it! Douglas Florian is a great place to start but don't stop there! We are blessed with a bevy of accomplished writers whose poetic abilities astonish. Check them out!
Posted by Sal's Fiction Addiction at 1:19 PM