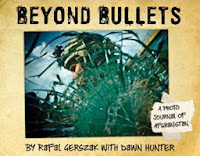 "Panjshir is paradise, except for one thing. As soon as you drive into the area, you see decrepit Russian tanks and old Russian artillery littering the sides of the highways and the farmers' fields. Such images bring back the reality of living in Afghanistan:"

After spending a year of his life embedded with American forces covering the war in Afghanistan and taking pictures of the day-to-day events of a military operation, Rafal Gerszak returned to Canada,  restless and ready to go back to the people of that country:

"Even after being embedded for a year, I couldn't help but feel that I had still seen only one side of Afghanistan's story. Almost as soon as I got home, I decided to go back to cover the other side: civilian life."

And so, he fills this book with images of the people who work and live there. His notes accompany the photos, adding details of his journeys in the form of a diary. While it is not always easy to read about some of the events he shares, it tells a compelling story that is personal and heartfelt. Part One shows photographs that were taken while he was embedded with the troops. It includes maps, information boxes that deal with concepts that are not always clear to those not living there (Taliban, the Quran, NATO forces, Islam). Some photos are captioned to give context and all are related to being with the troops.

Part Two is a result of an internal conflict he felt once he got back to Canada, and his concern about what his images did not show:

"I still didn't have a good understanding of how Afghan civilians felt about the war and how it affected their daily lives. I felt a pull to go back that I couldn't ignore; there was still so much going on that needed to be documented."

Back he went to Kabul to continue his work. The pictures in the second part of his book show life for the people of the war zone. He wants his readers to hear their voices and to know their stories. His writing style, which helps them tell these stories, is conversational and provides a clear picture for his readers. He shares their pain and laughter, their despair and their joy. He is open and honest, and leaves little to the imagination. He shows an abiding respect for their history, discusses their everyday lives and shows that we have similarities:

"In North America, guys might get together to play golf or watch a fight in their spare time. In Kabul it's much the same, except the golf course is all sand and the fight is between dogs."

Not too much is said about the women. Much changed for them under Taliban rule and today they
'struggle to find an acceptable place in society - between modernity and tradition - in Afghanistan.'

Hospitals are not much better:

"The hospital was filled with young children who were ill, malnourished, dehydrated, waiting to be treated. Some had been left, abandoned by their parents; others were there with their mothers only."

Rafal Gerszak has not made his last trip to Afghanistan:

"In spite of everything, Afghans stay strong and hopeful. And as long as they have stories they want to tell, I'll keep going back."
Posted by Sal's Fiction Addiction at 6:53 PM