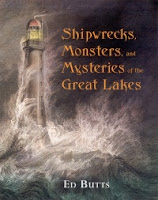 "The dream had seemed so real,
that in the morning Mrs. Doupe begged
her husband to take them off the Waubuno
and wait for another ship. The doctor
dismissed his wife's fears as ridiculous.
He wasn't about to change their travel
plans just because of a dream."

If you yearn for adventure and like reading stories that are entertaining, scary and true, this is a book for you to read. The waters of the Great Lakes are at different times beautiful, alluring and downright frightening. The stories included here are proof positive of that.

Ed Butts has chosen to share his stories in a chronological order, and tells us of the first ship lost:

"In 1679, a French ship called the Griffon, the first sailing vessel built on the Great Lakes, left Green Bay on Lake Michigan, bound for Niagara with a cargo of furs. The Griffon and the five-man crew were never seen again. Though no one knows exactly what happened to the ship, there is no doubt the Griffon's mysterious disappearance was the result of the first shipwreck on the Great Lakes."

He goes on to report to his readers that more than six thousand vessels have met their end on the Great Lakes. Many are the stories of song and folklore. Shoals and reefs, wild unpredictable winds, and rocky shores were just some of the dangers for travelers and shipping companies who navigated through Great Lake waters. Couple those with greed, lack of safety equipment and overcrowding and you had disasters in the making. Today the conditions are much improved with mapping, markers and government controls; but some dangers remain.

The first tale is of the Speedy, overloaded and with a storm approaching, which set sail across Lake Ontario and vanished 'from the face of the earth'. This is followed by seven more, including the Edmund Fitzgerald. The final two chapters consider the creatures believed to have been spotted on the Lakes:

"The earliest known sighting of something strange in Lake Ontario waters came in July of 1817. The crew of an unidentified ship reported seeing a black, snake-like monster about three miles off the Canadian shore."

Such sightings have been reported time and again. Lake Erie has its own stories. When three people were viciously attacked in August 2001, a doctor knowledgeable about the lake's aquatic life 'ruled out snapping turtles, lamprey eels, walleye, goby fish, and muskellunge'. He reasoned that it may have been a bowfin; but, he was quick to state that 'it was a big honking fish!'

Text boxes scattered throughout the chapters add information and interest. The bibliography is extensive and

lends scientific and maritime authenticity to the writing.

A most interesting read, due to its personal, easy style and careful research. I know exactly the table I will find it on this spring and fall, when I visit with Patti at the lake. It is sure to be read by their many visitors, and will hold a special place in her heart for having grown up on Georgian Bay.