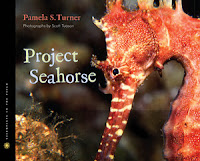 "The male seahorse's brood pouch bulges like a balloon. It puffs in and out, in and out, like the cheeks of a trumpet player. The seahorse pumps with his tail, bending and folding like a jackknife, working hard to give birth. A squirt, a gush - two babies pop out. Each is a tiny, perfect copy of its father."

Will I ever stop singing the praises of the Scientists in the Field series from Houghton Mifflin?  I doubt that completely. As long as they keep publishing such unbelievably welcome and accessible nonfiction for young (and older) readers, I will continue telling you about each new addition to the series. They are that good!
I need to make it plain that this book in not entirely about seahorses; rather, it is about a project that focuses on the seahorse population in the Philippines to help bring health back to the ocean's coral community. While scientists monitor the area for signs of improvement in the protection of the coral reef, a local fisherman makes nightly dives to catch the fish that ensure his family's survival. A balance must be struck.  Project Seahorse was developed to help both the scientific and local community to bring this about...ensuring the future for the ocean inhabitants and those who live by its bounty.
The seahorse stories captured my attention and actually made me wish (for a very short time) that a dive would bring the wonder of their world into my realm of knowledge. Instead I will trust these scientists to provide me with stories and wondrous photographs of this incredible underwater world. Here is a brief glimpse at one of the reasons for their dedication:
"Amanda still remembers a pair of White's seahorses she studies in Australia. The pregnant male was attacked during the night by another animal that bit a hole in his pouch and sucked out his babies. Amanda didn't expect the male to survive his terrible injury. Though nearby males tried to lure the female seahorse away, she refused to abandon her wounded mate. Every morning the female greeted her partner with the courtship dance that seahorse couples use to keep their reproductive cycles in harmony. After a few months, the male's pouch healed and he fathered another brood. "For any animal, that level of devotion is extraordinary," says Amanda."

Now, there's a story to share! Amanda's interest in the biology of the seahorse and, in part, this story led to her lifelong commitment to activism in assuring the conservation of these intriguing creatures of the sea. Thus, Project Seahorse was born. It has been up and running since 1998. Pamela Turner has done an exceptional job of telling the story of the Philippine community, its dependence on the reefs and its willingness to help protect them. It is, at times, a tricky balancing act. But, it is worth the hard work that is being done, and she gives us up-to-date findings on the impact the project has had in stemming the loss of this amazing creature and the other sea life that shares the habitat.

You will wonder at the remarkable shots of the ocean world that Scott Tuason has captured! I cannot imagine the patience, the stillness that must be achieved and the delicate maneuvering it takes to get such clear and detailed photographs. He makes the reef come alive for those of us who live beyond it!

As with other honored nonfiction, Pamela Turner's narrative acumen lets us read this as story...a powerful telling that captures our interest, our empathy and hopefully, our need to help in any way that we can to conserve the wide expanse of ocean that lies mostly unprotected. We can make a difference when we care!
Posted by Sal's Fiction Addiction at 9:51 AM