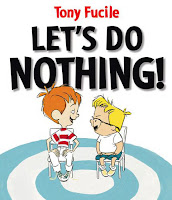 "I think we've done it all. We've played every sport ever invented, painted more pictures in a day than van Gogh did in a lifetime, baked enough cookies to feed a small country, played every board game we could find, read every comic book in th-
OK, Ok. Let's stop talking for ten seconds. All right. Ten seconds of nothing."

Frankie and Sal are sure they can do nothing...and they do their best to have it happen. But, in a young boy's world, it is an impossible task they set for themselves. They try and try and try! First they are statues, then giant trees, and then the Empire State Building. Frankie is a young man with a huge imagination and each time they set themselves to 'do nothing', he cannot help but imagine pigeons landing on his immobile statuesque frame, Sal's dog peeing on the base of the his tree, or King Kong threatening him from his aerie perch.

As Frankie imagines the happenings, vibrant colors fill the pages. When things are real, it is just the boys, and backgrounds of flat blue or white space. But the boys steal the show! You know they are full of mischief from the get-go and it is easy to imagine their adventures continuing ad infinitum. As they sit in their chairs, doing their best to do nothing, you can sense the raw energy, watch the expressions and be sure that a release of that contained power is in the offing.

I love this book! It is so much fun to read, and to watch and listen to the reactions as children listen in on two boys who cannot be contained. Finally, they are off to 'do something'! We have no doubt that it will satisfy them for a bit.
Posted by Sal's Fiction Addiction at 3:11 PM